Everything you need to know about Finasteride Finasteride is one of the most used drugs to stop hair loss. It is basically used for two treatments: the treatment of benign prostatic hyperplasia and androgenic alopecia.

Within these inhibitors, finasteride is included. Finasteride was the first drug approved by the FDA (Food and Drug Administration in the United States) to treat alopecia, as a hair loss treatment and to stimulate hair growth.

How does Finasteride work?

This medicine is involved in the process by which testosterone is transformed into the so-called DHT, the hormone responsible for the enlargement of the prostate, in addition to the cause of alopecia in men or the appearance of acne, among other symptoms. By blocking the production of this male hormone, Finasteride serves to stop hair loss, as well as to treat benign prostatic hypertrophy.

This medicine can be bought in pharmacies with a medical prescription. It must be taken into account that the cost of it can be reduced if the generic drug is acquired. Although, there are many laboratories that sell this product with different brands, also with affordable prices. The most recommended are usually Propecia, generic Finasteride, Alocare or Proscar.

The standard dose recommended is 1 milligram daily. In case you forget to take a dose of Finasteride you should continue with your normal medication schedule. Never take a double dose to make up for the one you have forgotten.

Normally, the results begin to be noticed after six months, knowing that if at any time the medication is stopped, the hair will most likely fall out again with the same intensity as before. You have to wait at least one year of treatment to see if the treatment really works for the patient.

One of the frequently asked questions is whether this product has the same effect in all areas of the head. It should be said that in most people who have tried it, Finasteride usually has a greater effect on the crown and upper part of the head than in the area of the hair line or front line. As previously mentioned, you have to wait approximately one year to see the positive results.

83% of people who underwent treatment with Propecia (finasteride), saw positive results in hair growth and the arrest of their fall and. Of them, 66% even increases it.

Something to keep in mind as mentioned above is that if Finasteride treatment is stopped, it is most likely that the hair will return to its initial state, and the hair will weaken again.

Who can take Finasteride?

Finasteride medication is indicated for men between 18 and 45 years old, with androgenetic alopecia.

On the other hand, the following side effects of Finasteride include: 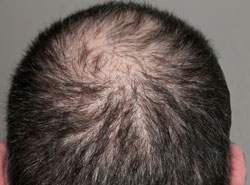 In most cases, these alterations are reversible at the time the medication is stopped, although some of these symptoms may persist for some time.

It should be noted that in the various clinical trials conducted to evaluate the effects of Finasteride, only 2% of men who were treated with this drug (from a sample of 3,000 participants) had to discontinue treatment with Finasteride for alopecia due to the appearance of some side effect of the listings above.

Compatibility of Finasteride with other medications

It has been proven that there is synergy between finasteride and other medications such as minoxidil. They are not only compatible but may increase the desired effects. How is the postoperative period of a hair transplant

Minoxidil and shedding, what it is and why it happens?

Hair transplant in the crown or vertex region